As I’ve just found learned, today is the anniversary of Journey’s release ten years ago. It’s a video game from thatgamecompany where you guide a mysterious wanderer in robes on a pilgrimage to climb a distant mountain.

Journey is one of the games that’s stuck with me a lot since I’ve played it.

Largely a single player experience, it’s possible to encounter another lone human-controlled character on your travel. Communication is limited to a single button for chirping, so you and your partner must figure out your own language as you adventure together. Short repeated chittering might indicate excitement or urgency, whereas longer humming leans closer to a conversation.

It’s also the first game I went for completion in, earning the white robe for my character by collecting all the hidden sigils. Even then, I’ve still replayed it from time to time in the years since. 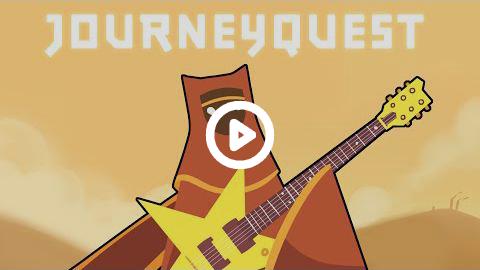 Thinking back to when I first saw Journey on the video game review show Good Game, I’m reminded of how I was a decade ago. I used to avidly tune into the ABC on Tuesday evenings to see the new game reviews. These days, Hex has moved on and Bajo streams on Twitch on those same Tuesday evenings.

In the end, I’m left with memories of Journey that I hope will stay with me for a long time. I’ve got the soundtrack from Austin Wintory on vinyl and digital, and I look forwrad to playing it again one day.

I’m a developer with a passion for web development and automation!

I use this blog to write about my interests. They’re usually tech-related, but there’s also the odd music and gaming piece too.

If you’re wondering, this is Niko from the game OneShot. You should play OneShot.

A good start for October →